This is the first module of four that make up the certificate course at the Royal School of Needlework, and my piece is now assessed and framed. 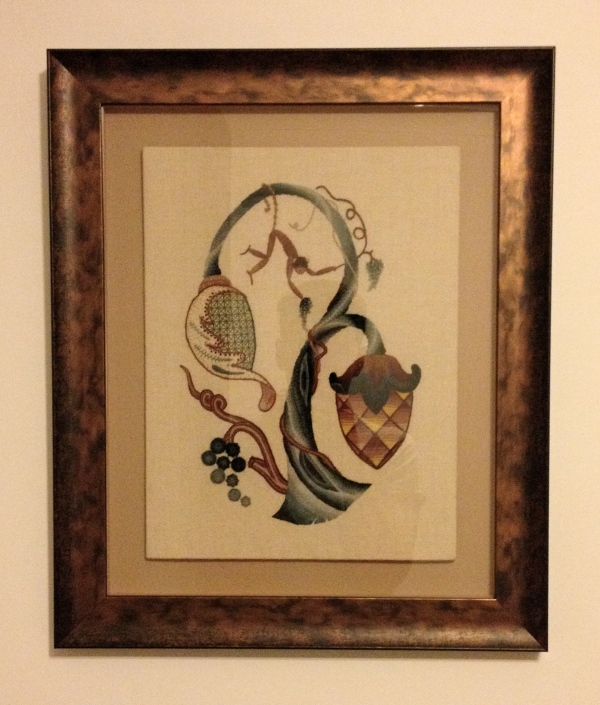 I did well! I think. Although how can you tell when you’ve not got a class full of peers to compare yourself too? I wouldn’t say I’m competitive, but I do like to know how everyone else has done. And maybe also rest assured that I kicked their arses.

The course works on a very flexible system of attendance, so although there are a dozen other students in the classroom with me on any given day, they could be working on any one of the ten modules covered by the Certificate and Diploma courses. We’ll all have started at different time, we’ll all be at different stages, and we’ll all pick up our results discreetly and mostly without discussion.

I scored (is that the right word?!) 87 out of 109. Which is basically 80% and where I come from that’s a 1st! A grade which I think I only achieved once during my BA, for an essay on postmodernism which has been less help to me than algebra over the intervening real-world years.

I got full marks for several areas, including taking care of my fabric, use of colour, smooth outline stitches and sharp points. Apparently my burden stitch on a curve was very brave. My lowest marks came from not including enough open areas and also the quality of my slip stitching on the reverse of the mount. Not going to lose sleep over those! 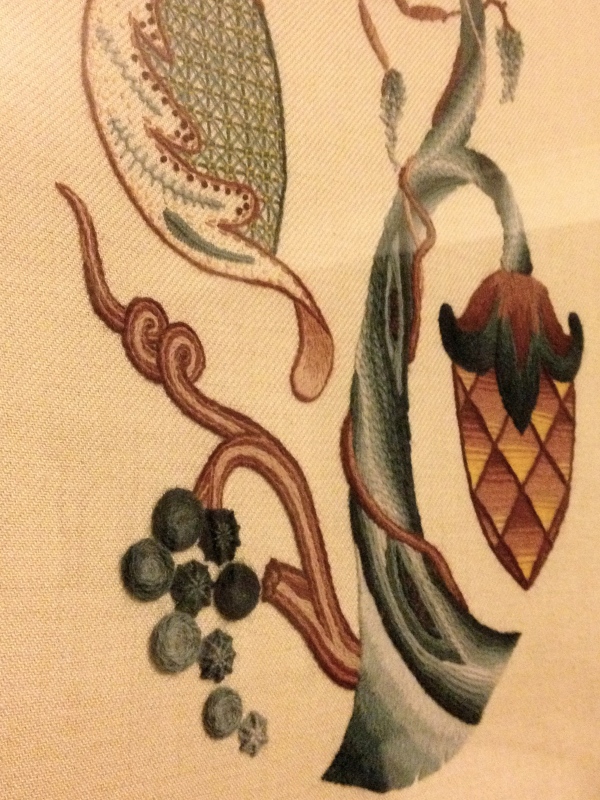 The feedback did hammer home that this is not some arty-farty, high faluting, conceptual Saint Martins’ course… This is a technical course in traditional hand embroidery techniques, with more than a passing care for their historical context. And I am a geek for that stuff, a pedant of the first water who will research meticulously to understand and articulate the era at hand; but even I was docked marks for elements of my design showing ‘a modern interpretation which sits outside the brief’. I do like that, although being a rebel at the RSN is being a moderately sized fish in a very tiny pond.

They concluded that my concept was unusual and my finished piece striking, so that’s nice.

Choosing a frame proved tricky. Maybe the assessors were right and the slightly contemporary twist on a generally historical feeling piece left us finding that no style of frame really felt right. Not only that, but it also needed to reflect my taste as maker and my mums’ taste as future owner and viewer. We were in the frame shop for a very long time. We had to go for full English breakfast afterward to recover. 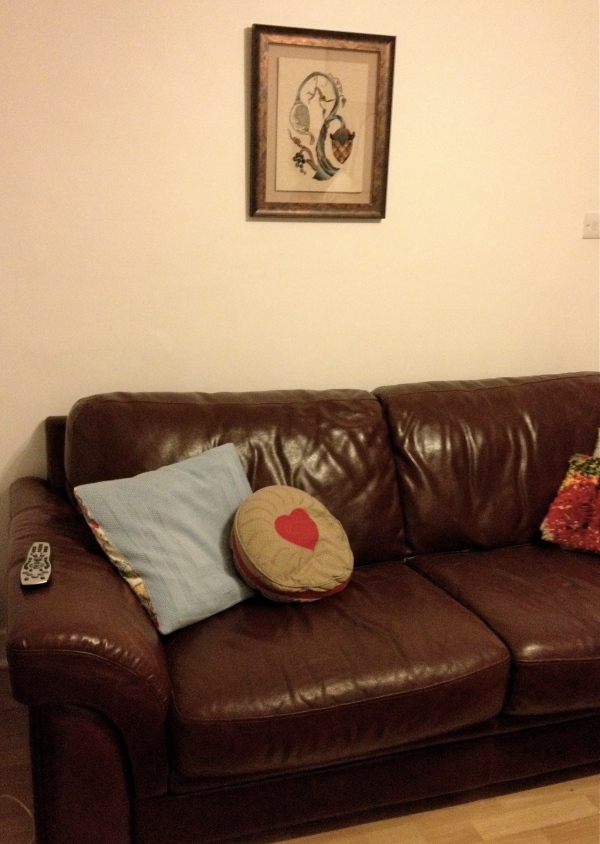 I think the final choice was alright though, and it does seem at home in my mum’s living room despite a slight clash with a jammie dodger cushion. Not that it was cheap! A hundred and fifty quid to get something framed – is that normal?! I suppose when you consider that this module of the course cost me well over a grand in fees, plus a bit more in materials and transportation, and easily a hundred hours of my life; the cost of the frame is a piss in the ocean.

I am well into the to blackwork now, four classes in to the eight class unit. I’m going to work a bit more intensively on this one, I worried about the fabric being stretched for a full year while I completed the Jacobean and although there were no visible effects on the finished work I think it’s generally better to avoid the excessive strain. The rest of my dates are booked in the diary, so if I can stay on track I’ll be putting the finishing touches to it in 2 months time.

I’m six days in to the eight day module. Still really enjoying myself :) and yeah, I have done so much sewing that my fingernails hurt, but as I wandered back towards the palace after getting my lunch, stuffing a brilliant mozzarella and chorizo panini in my face and revelling in the February sunshine, I thought ‘fucking hell, this is better than being at work’.

Today I have done three new stitches for three big sections, which is great because I really need to make strides here! I finished off the laid work section for the berry-thing on the right hand side, so I could move on to the long-and-short for the top sections (…sepals, possibly?! I did biology A-level, believe it or not! I’m sure I have more plant knowledge than I’m currently using). Long-and-short was really tough, by far the hardest bit so far, but I’m quite pleased with the results…

Split stitch outline on the external lines of the area: 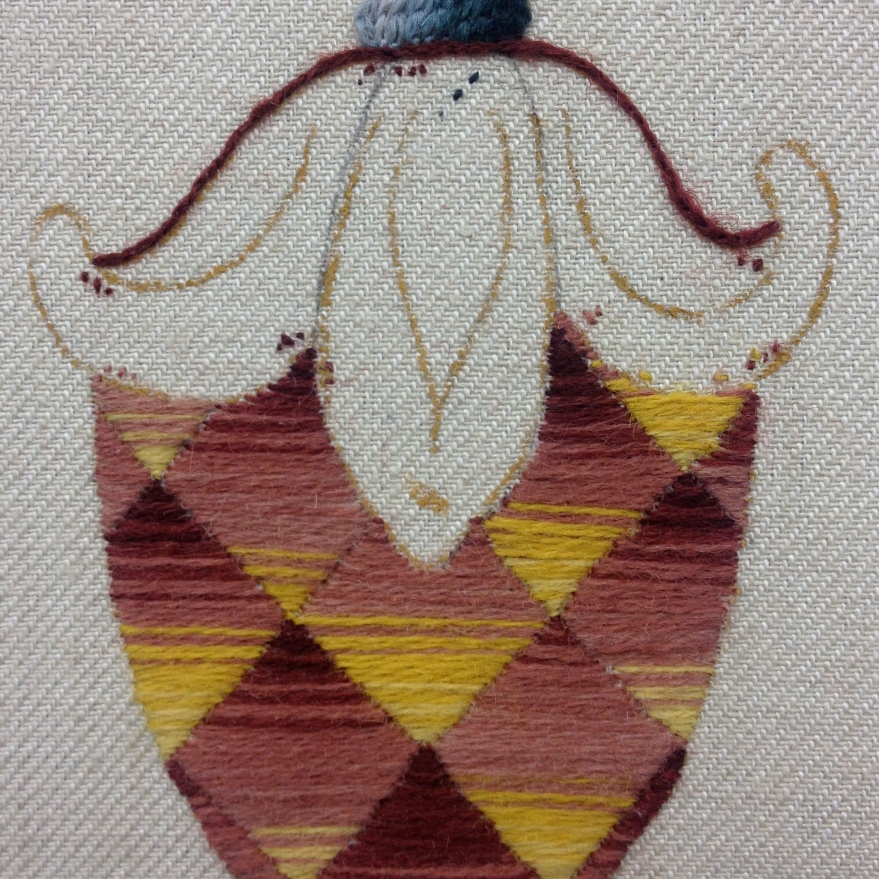 Long and short stitches in the darkest shade: 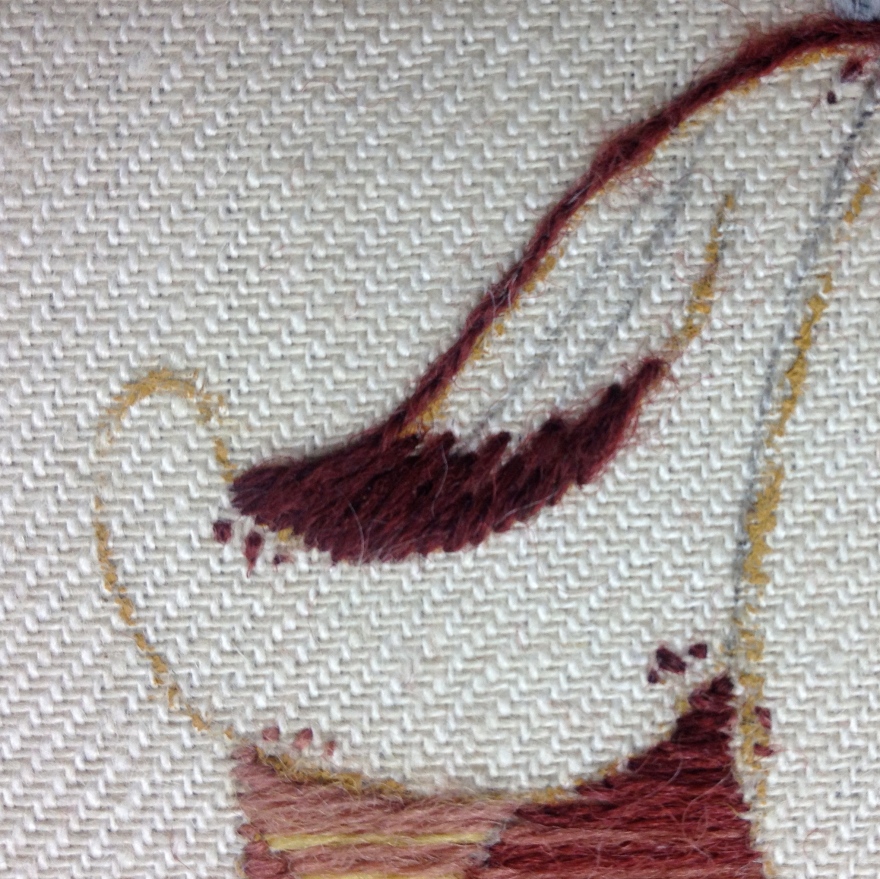 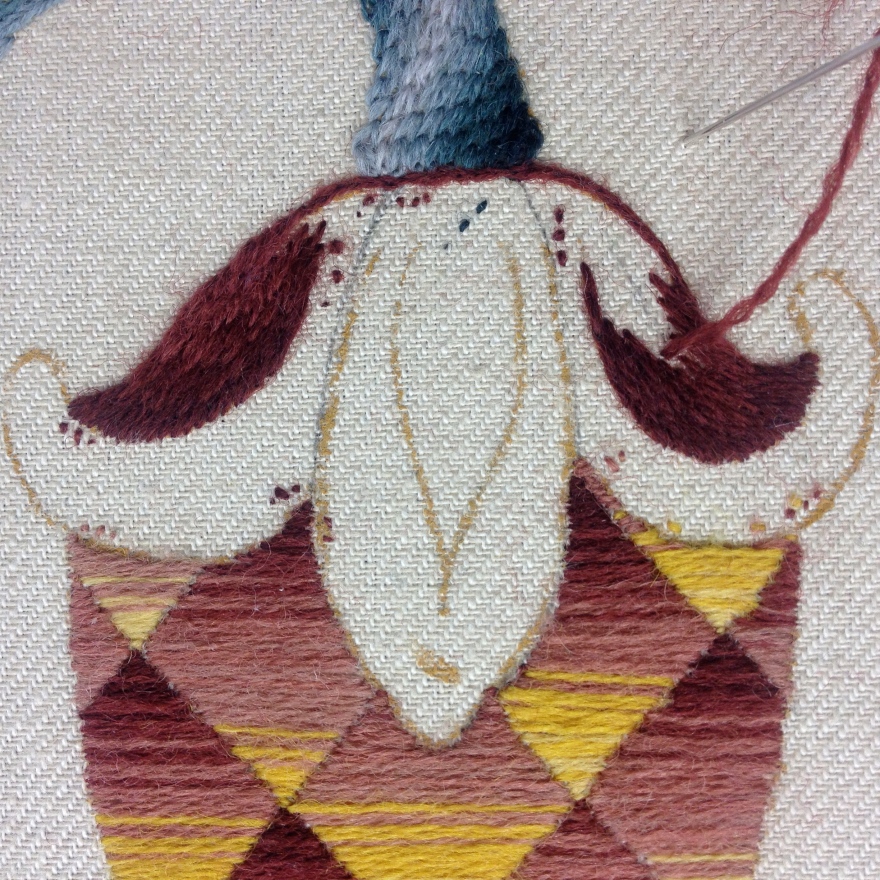 Moving on to the next section, working from background forward: 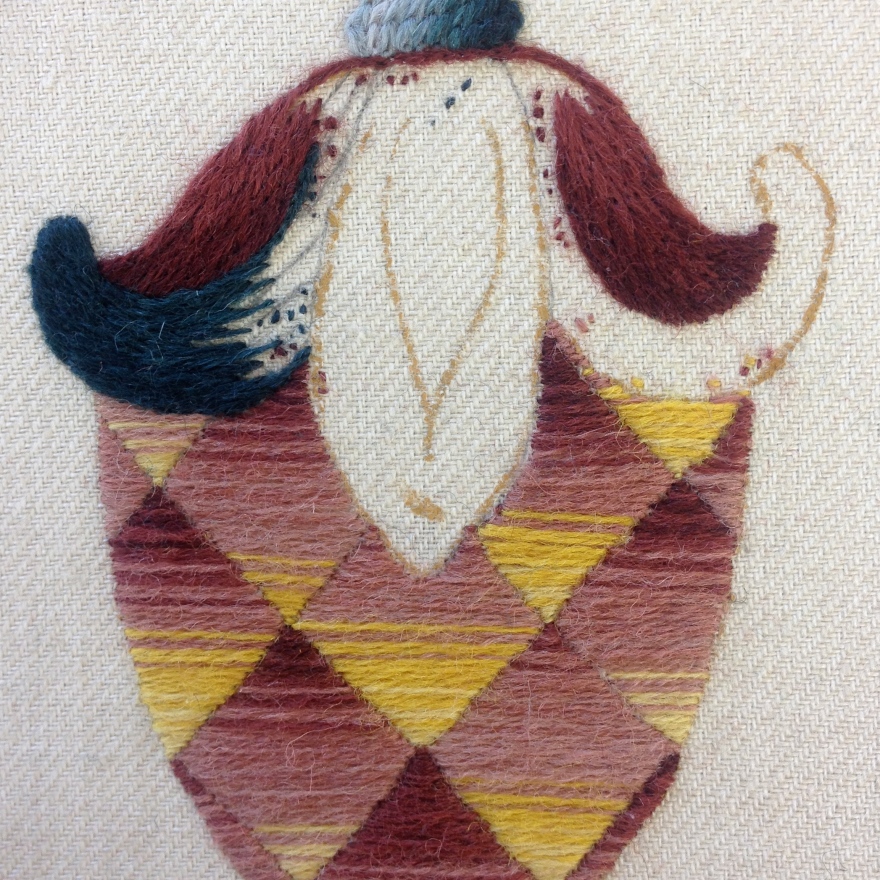 And it’s current state! After the centre section I’ll add the lightest pink shade to the top: 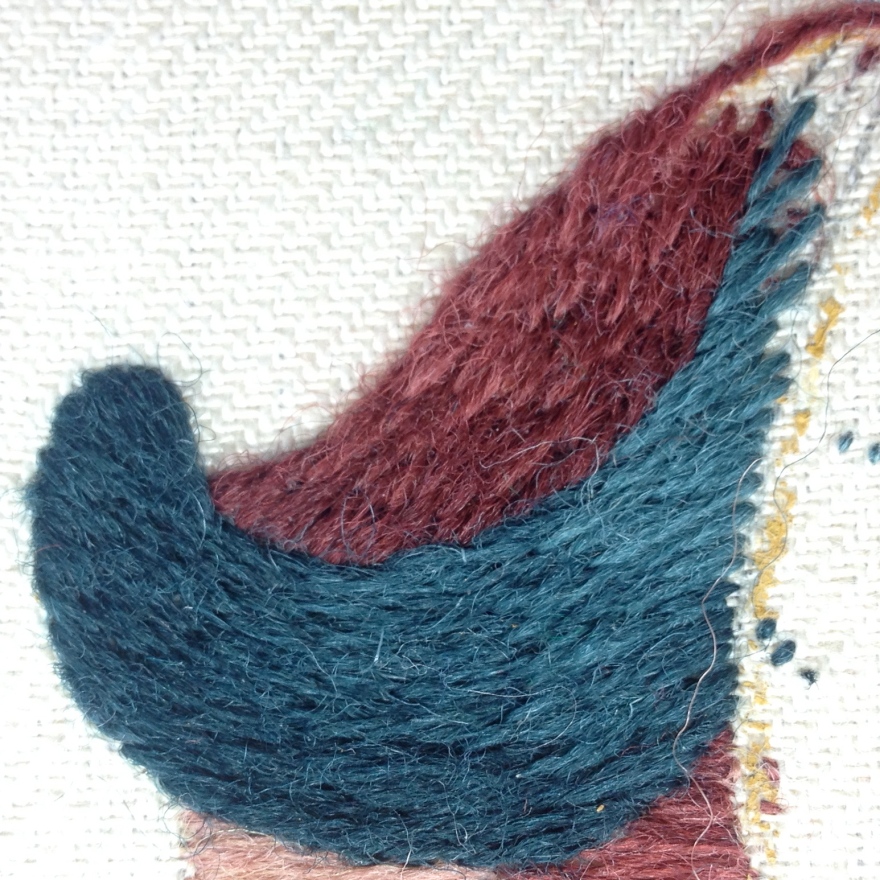 After that I covered the big trellis section on the left hand side, which is super satisfying in both speed and geometry. It’s a double grid with little circles to anchor it which I’m calling ‘pips’ although I’m not sure that’s the official term. Stages as follows… First lines, along the direction of the twill: 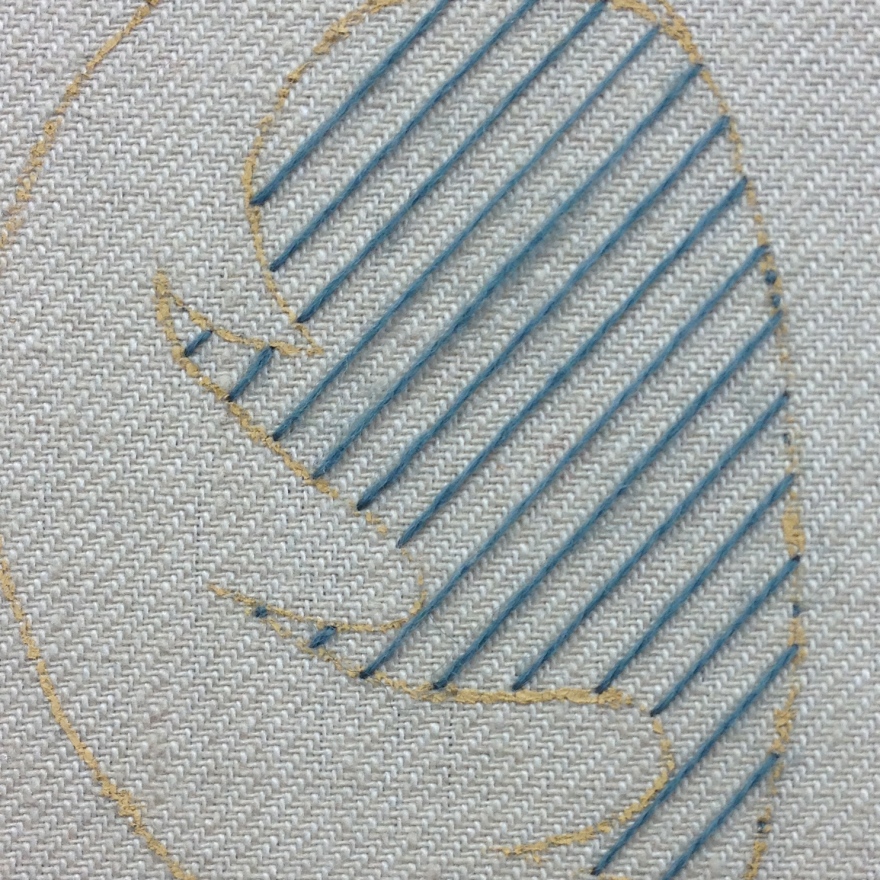 Second lines, at right angles to the first, at a distance to make perfect squares: 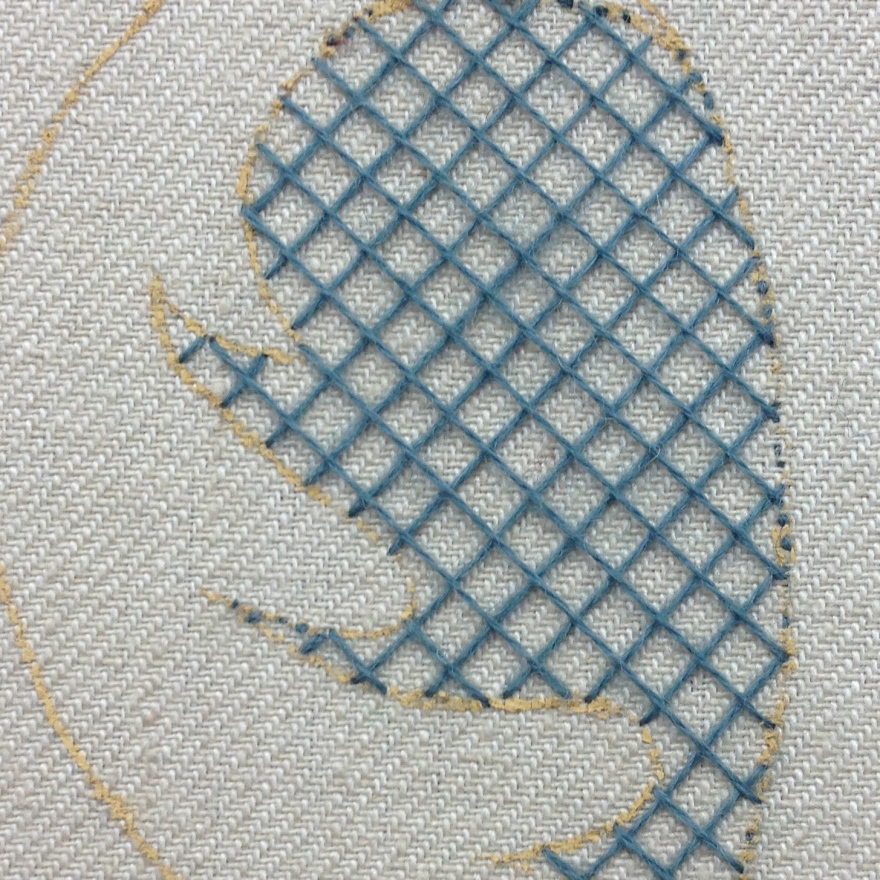 Third and fourth layers, in a darker shade, crossing every other row of diamonds already laid down: 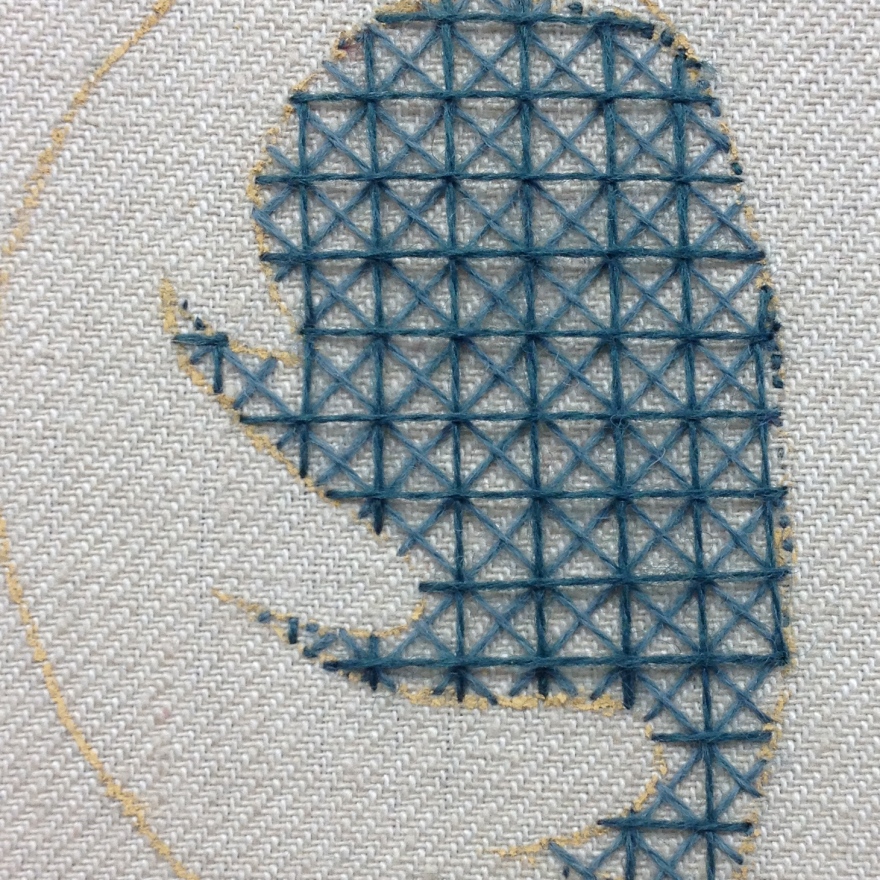 And finally the pips, little circles running under the first layers and over the top ones to pull the lighter shade to the front: 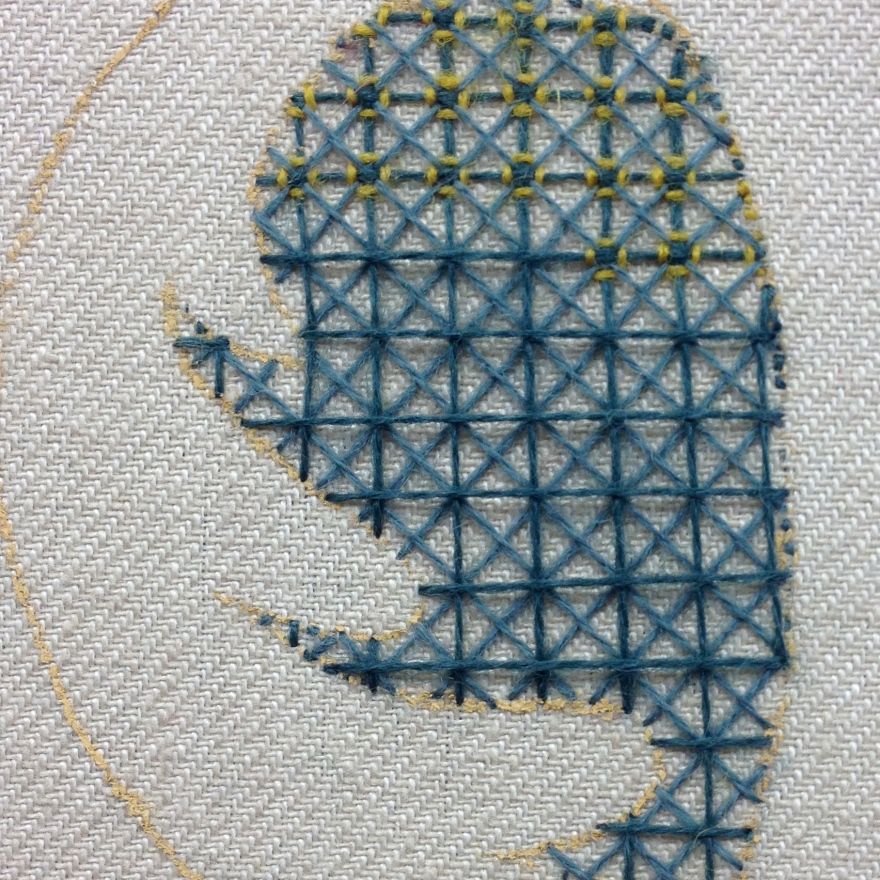 And to finish the day I did the first of 9 wheels, which will form a bunch of grapes at the bottom left of the design. These will be shaded within each wheel, and also gradually get lighter towards the bottom of the bunch… 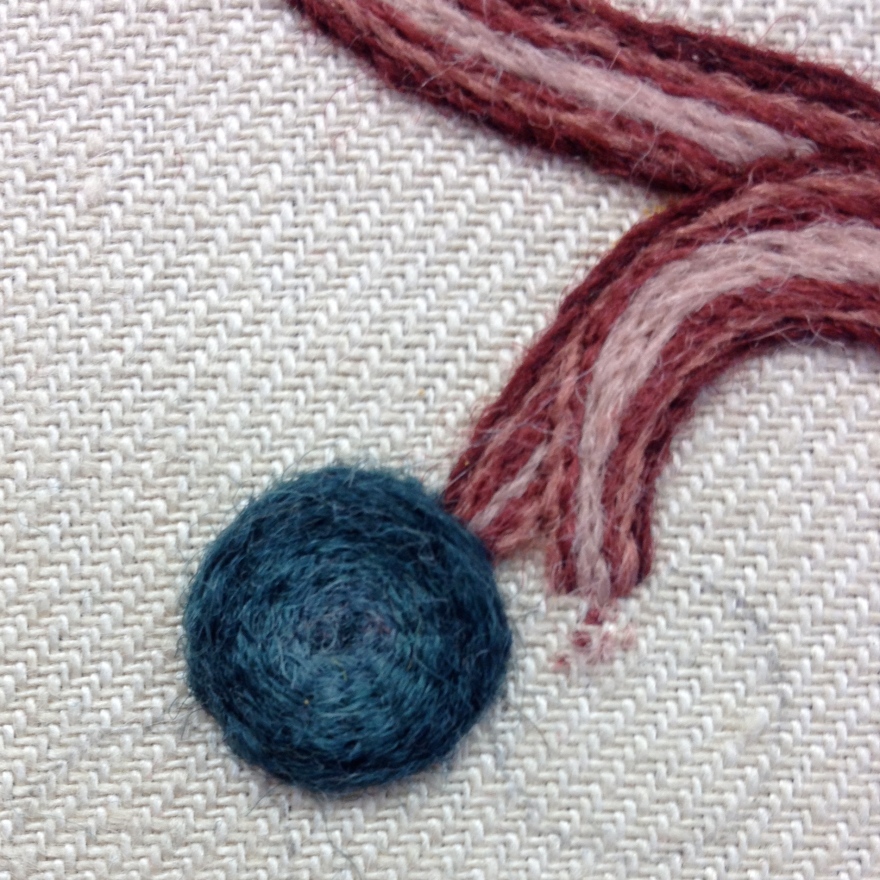 And so this is the current state! Lots more to get through but it’s coming on… 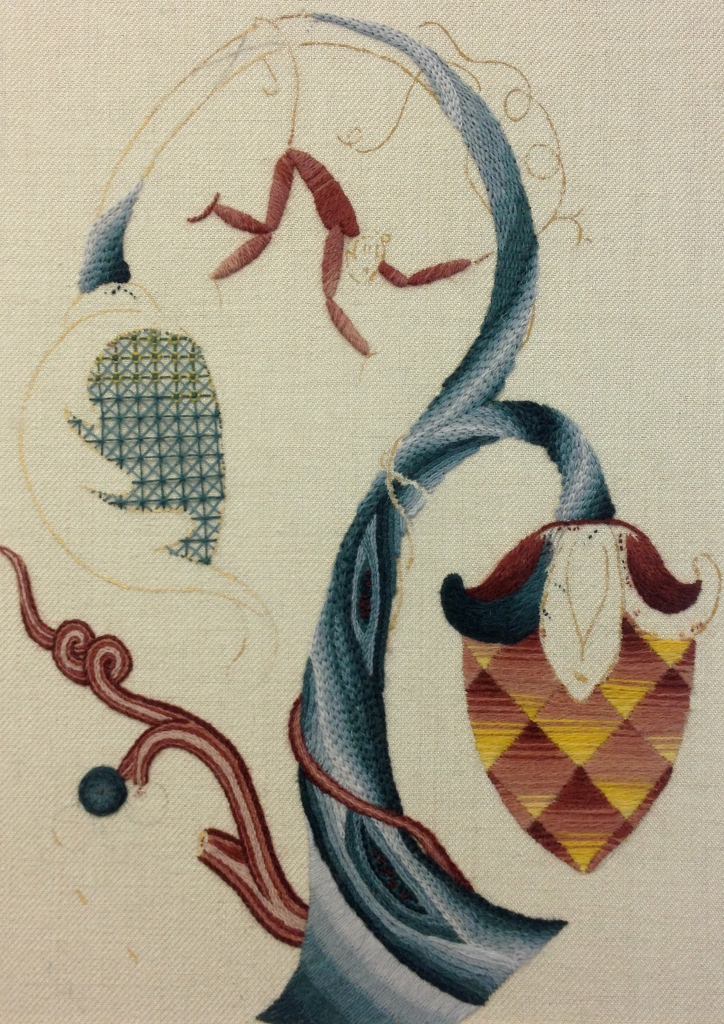 Progress from the second day of the certificate course at the Royal school of Needlework!

Today I have finished framing up, pounced and painted the design onto the fabric, had my stitch plan critiqued and improved, and started the actual stitching :) Almost three weeks until my next class in which I need to complete the chain and block shading stitches I’ve started, plus begin a heavy chain stitch area, and test out some trellis suggestions on some scrap fabric. 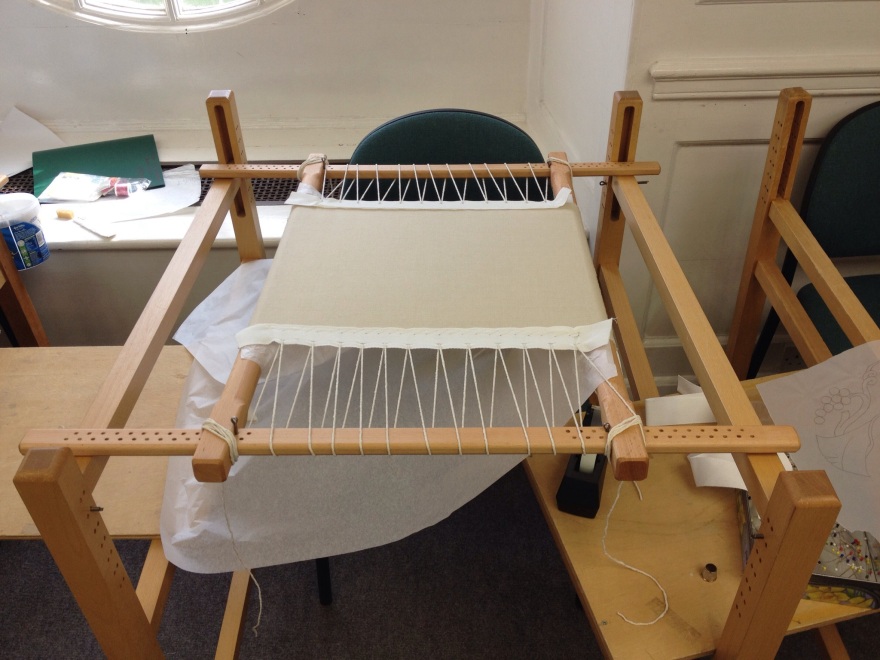 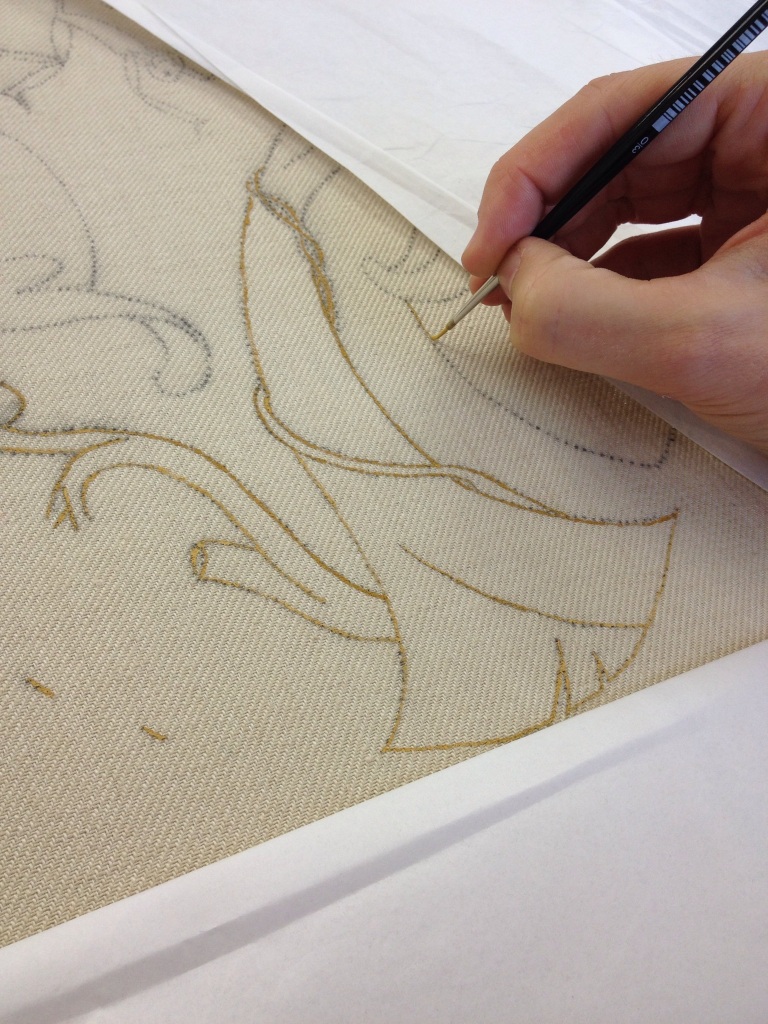 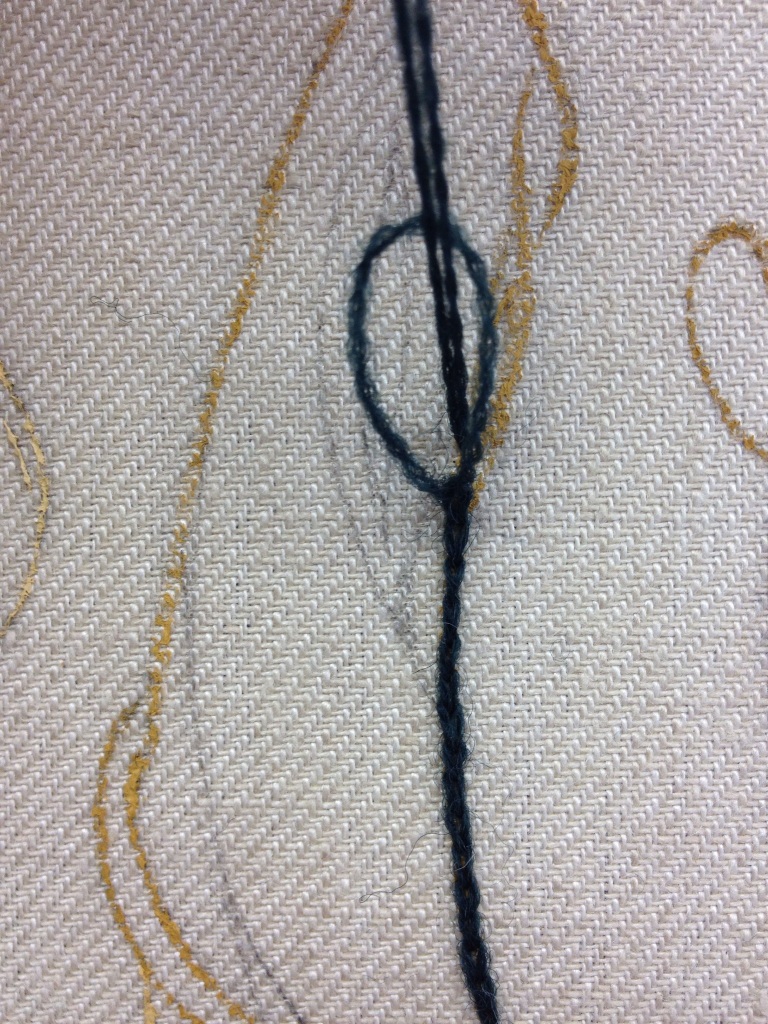 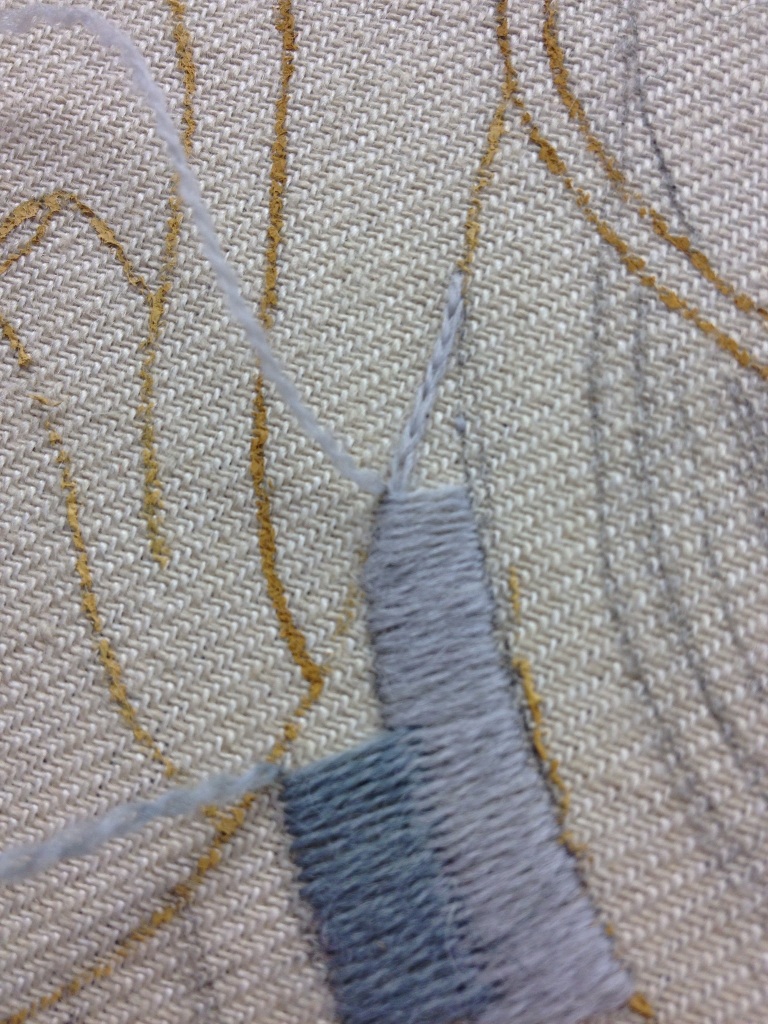 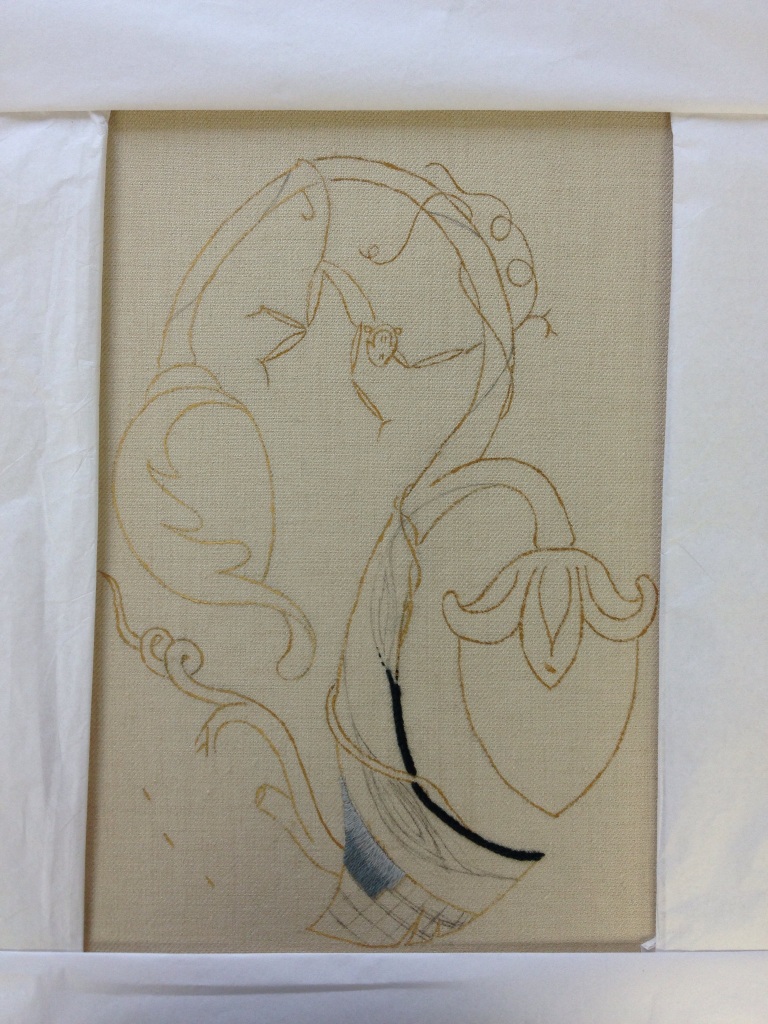 So I’m really properly on at the RSN now! Had my first day last week and loved it. Shame I look like a muppet in my 2year-long security pass, but never mind! 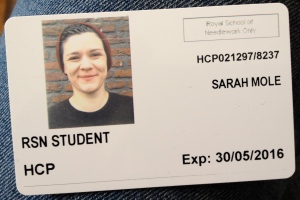 The design is finalised, following a bit of sketchbook research and doodling: 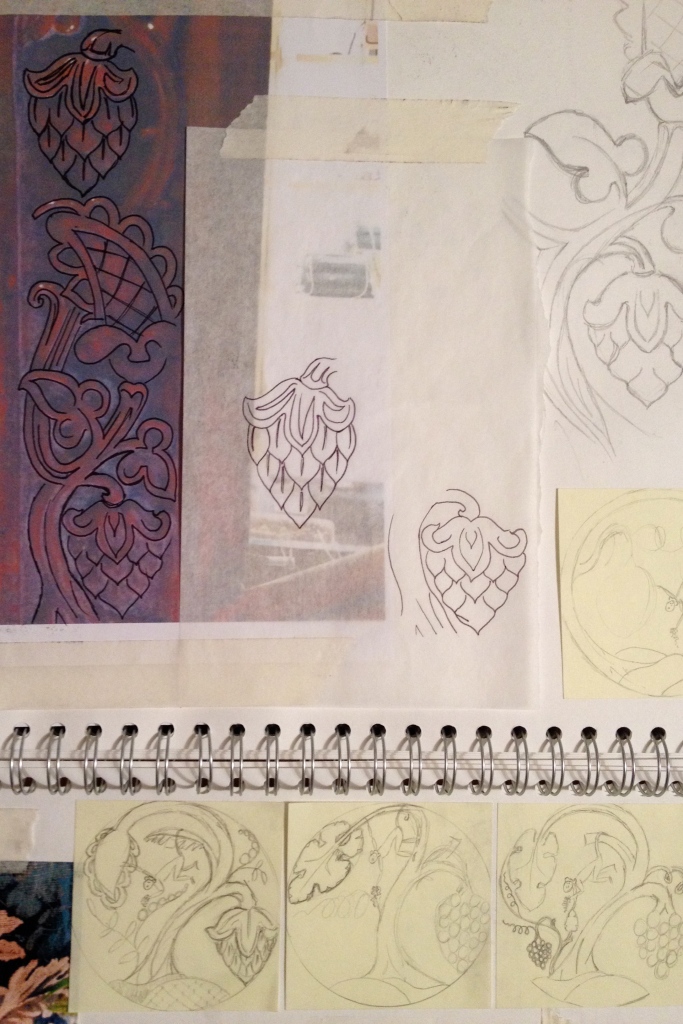 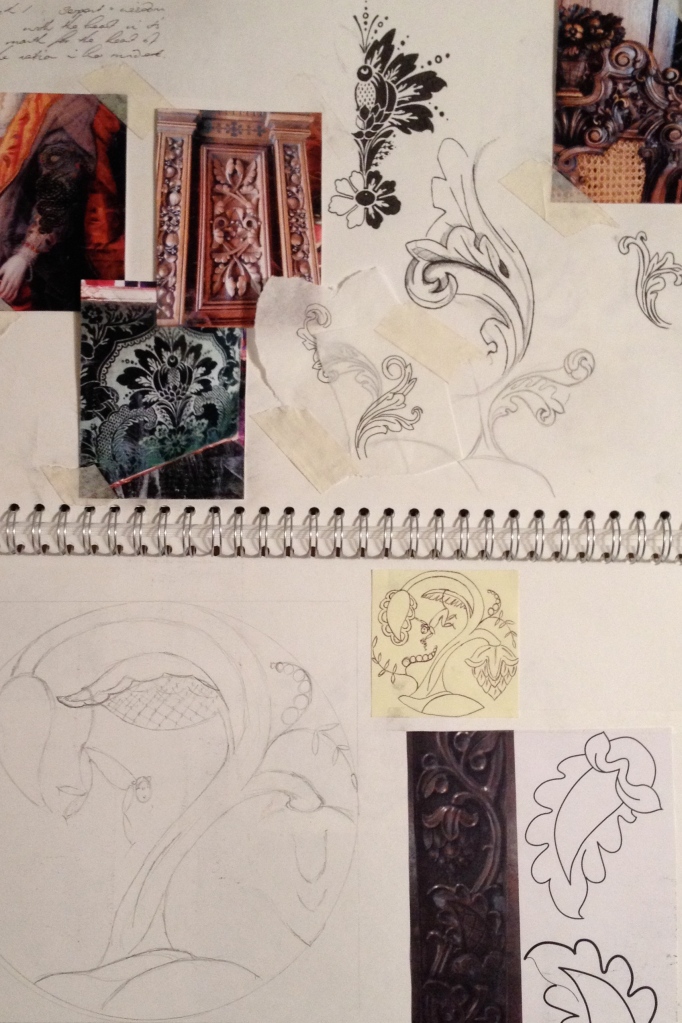 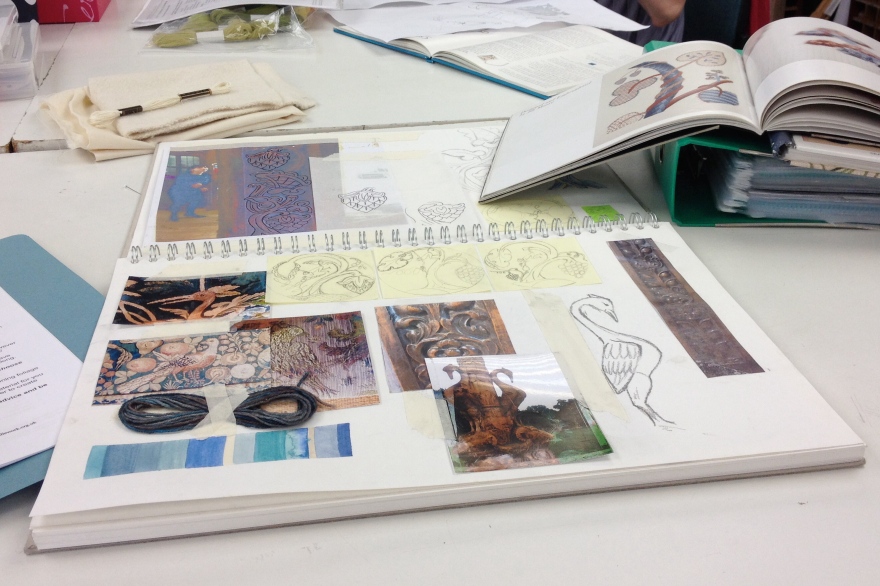 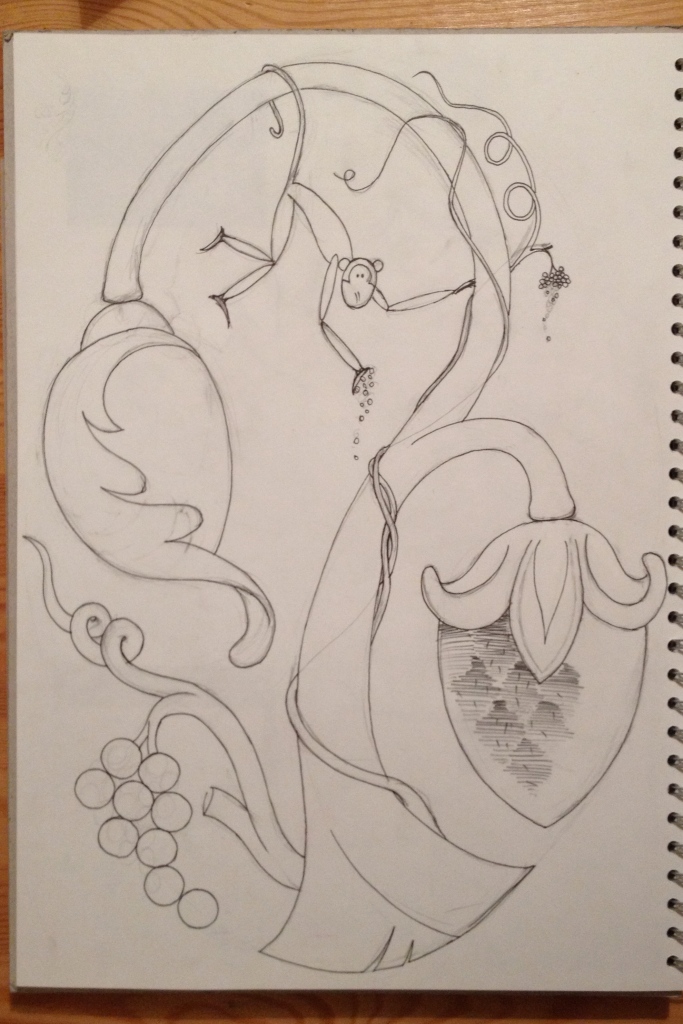 The design has been copied to tracing paper and then all the lines have been perforated, this will form a template for painting the design to the fabric next time around: 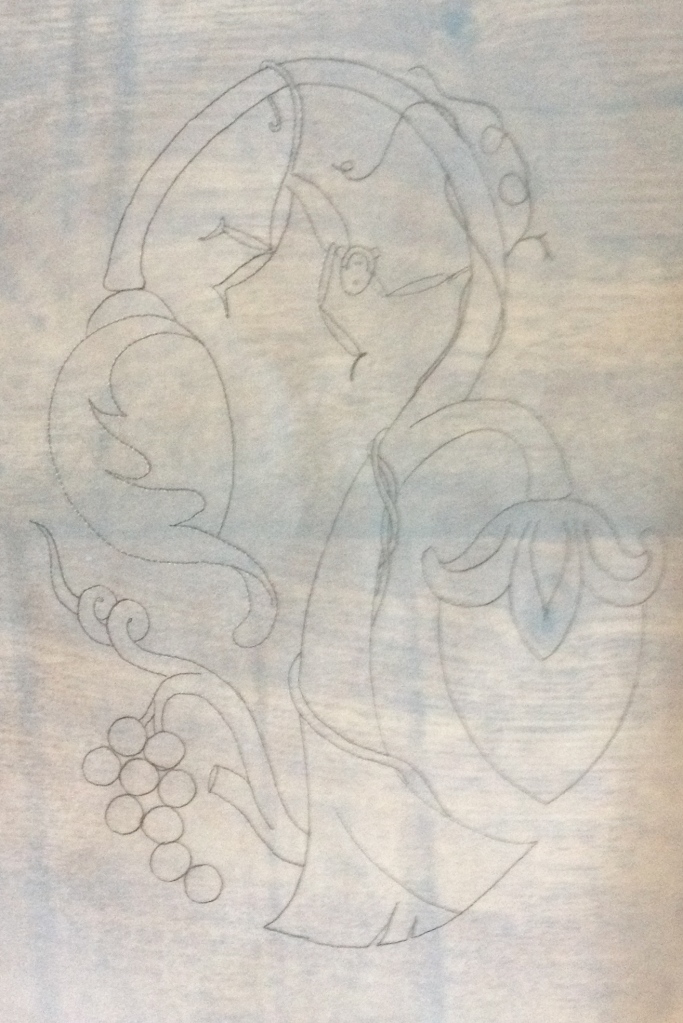 I’ve started to set up my frame, but can’t finish that until my next class, so in the mean time I’ve been experimenting with stitches, using the actual colours of wool which I’ve chosen: 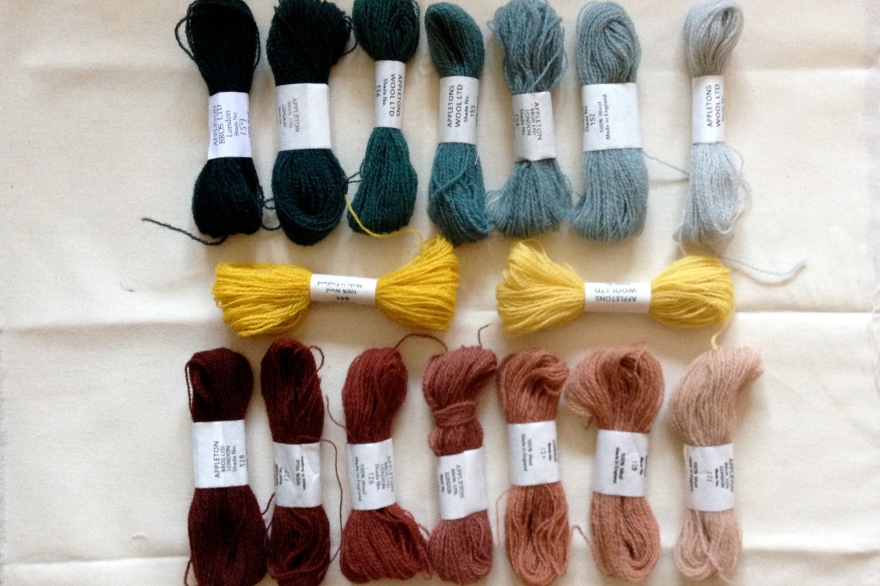 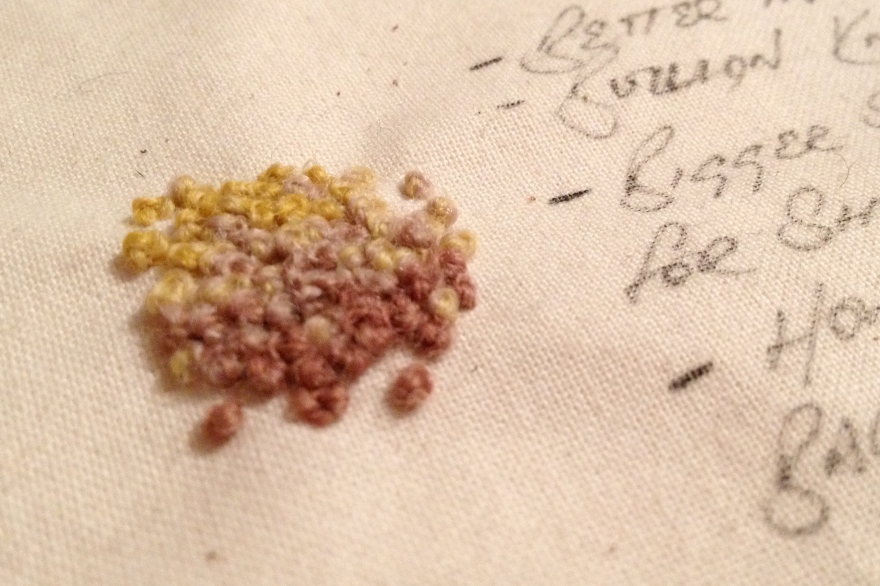 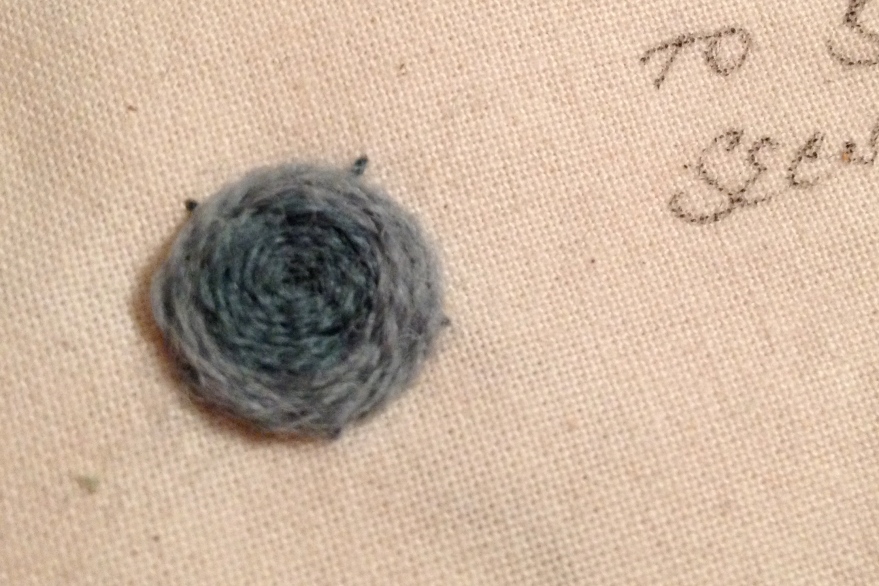 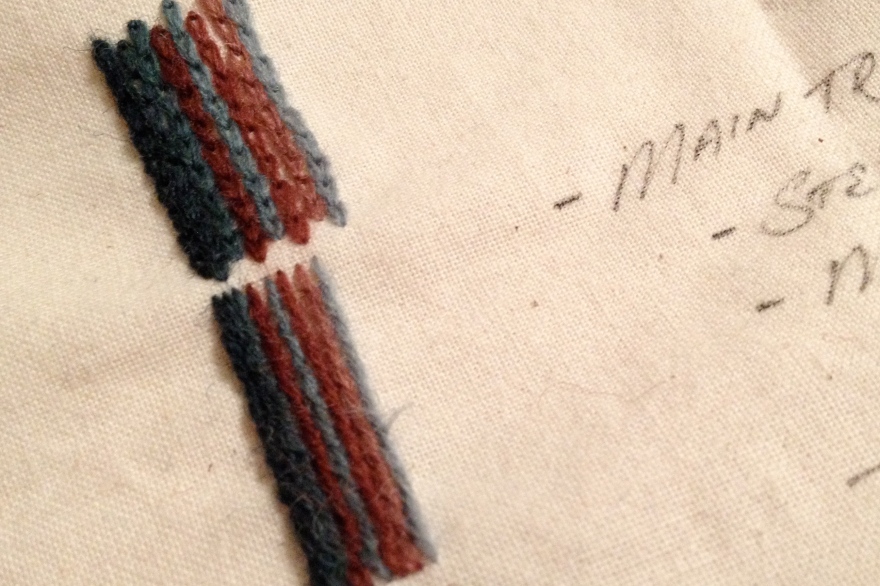 I’m really into it! It’s very traditional, and in a way that feels a little pointless to me, but the experience and the skills are fantastic. So glad I enrolled for it! One day down, four years to go…