This is going to be a fairly quick catch up, mostly because I don’t think I took many decent pictures!

In my last blog post (here) Paula tried on the first toile, we pinned it to fit and we made a lot of design decisions. I used those fabric pieces to draft a new version of the pattern in paper, and that’s what I’ve used to cut and make the second toile.

Because the mesh fabric we’ve chosen is so unusual I decided to make the top part of this mock-up in the real thing, rather than calico. Partly because it would be impossible to get the perfect fit otherwise, and partly because I’ve never worked with something like this before so needed the practice! But as it’d just be costly and unnecessary for the skirt I’ve carried on in a medium/heavy weight calico there. 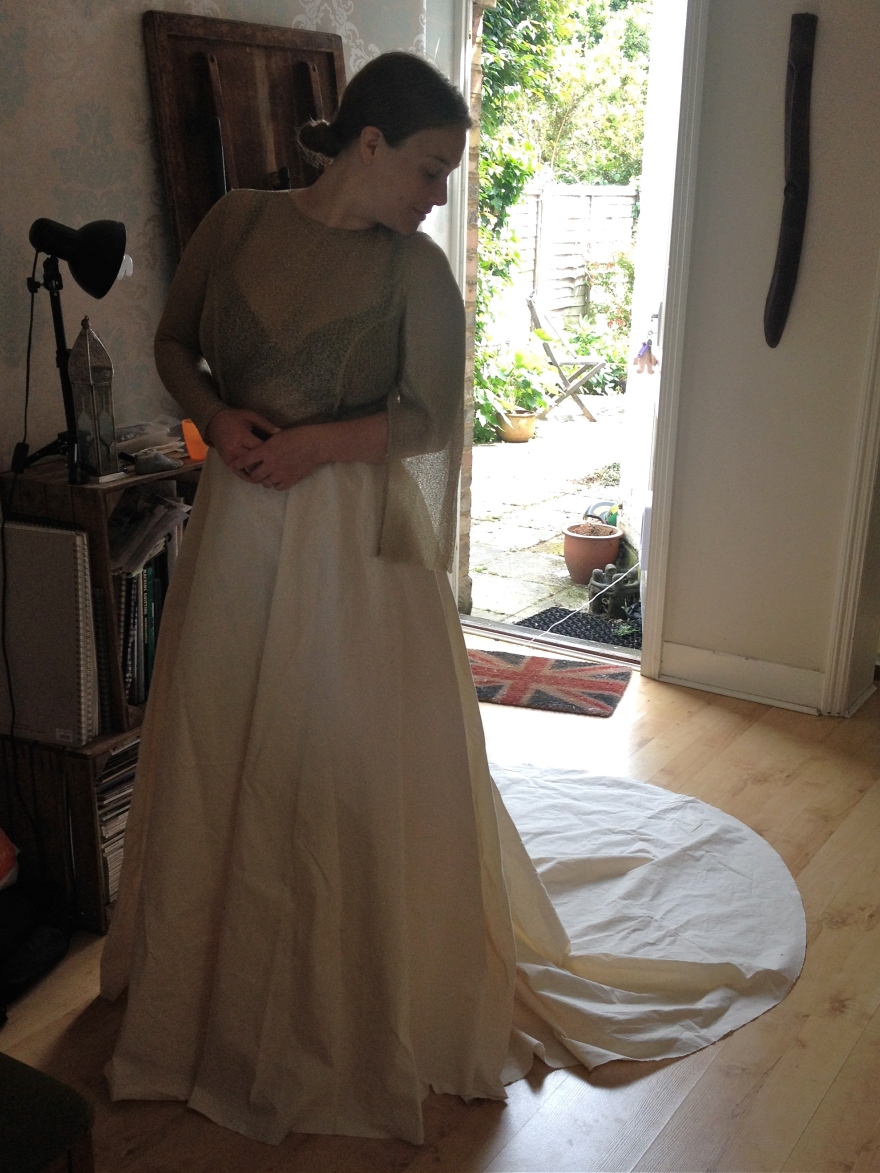 Which led to the first problem – I had the calico in hand before the mesh, so I went ahead and made the skirt first feeling all smug and efficient… Until I realised that meant I couldn’t put the bloody zip in properly. I should have sewn the waist seam for the left and right back panels first, and the centre back seam up to the bottom of the zip opening, then put the zip in, then carried on with all the other seams. Lesson learnt.

The zip threw up a multitude of issues actually. I tried two different methods on the left and right, one with the zip tape between the layers of mesh and the other treating the two layers as one, and in that confusion I stretched one side out pretty badly and ended up with the back neck line on the wonk.

And then there’s the petticoat, which I hastily threw together the night before the fitting because I wasn’t really sure what I wanted! But actually that was fine, we talked about how it should be and we used the bit I had made to cobble together a look we liked under the skirt. So this will be the next part I work on; I need to make a wide facing with boning, I’ll meet up with Paula again and check it fits like a glove, then I’ll attach the lining and the amount of mesh we’ve decided on and that will be the first section of the final dress to be finalised.

The actual fitting went well! She seems like a happy camper, so I am too. She’d planned to wear a shaping body con thing underneath, Spanx-style, but actually when we tried that on it just seemed uncomfortable and unnecessary. Also less flattering, weirdly enough. Sometimes I think those garments are counter-productive, instead of smoothing out your silhouette they just squeeze you into a generic amoeba shape with no distinction between bust and waist, bum and thigh. Back in her normal bra the bodice fitted so much better, and we can even take away some fabric from the midriff to properly define her figure – infinitely better than the Spanx scuba sausage. 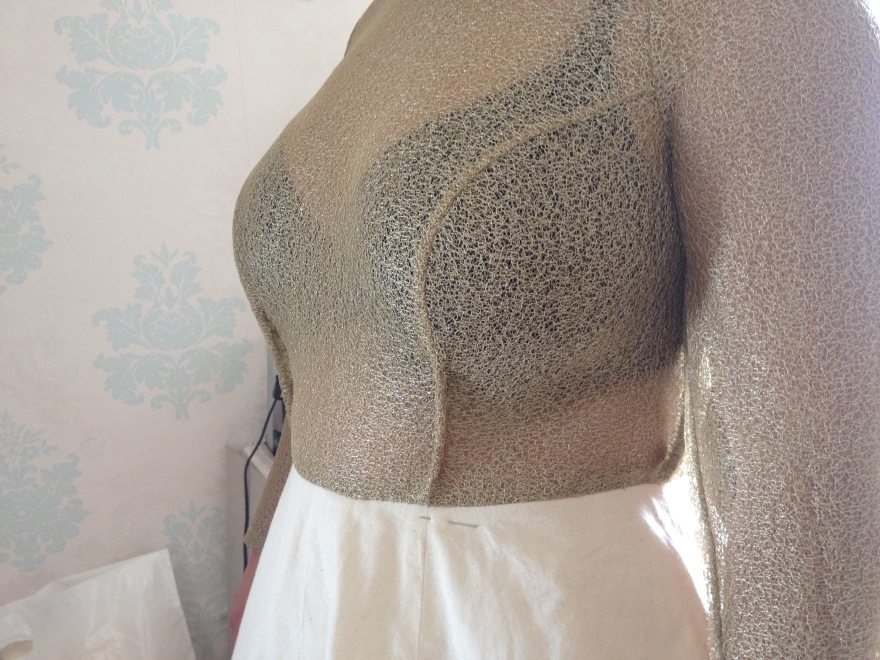 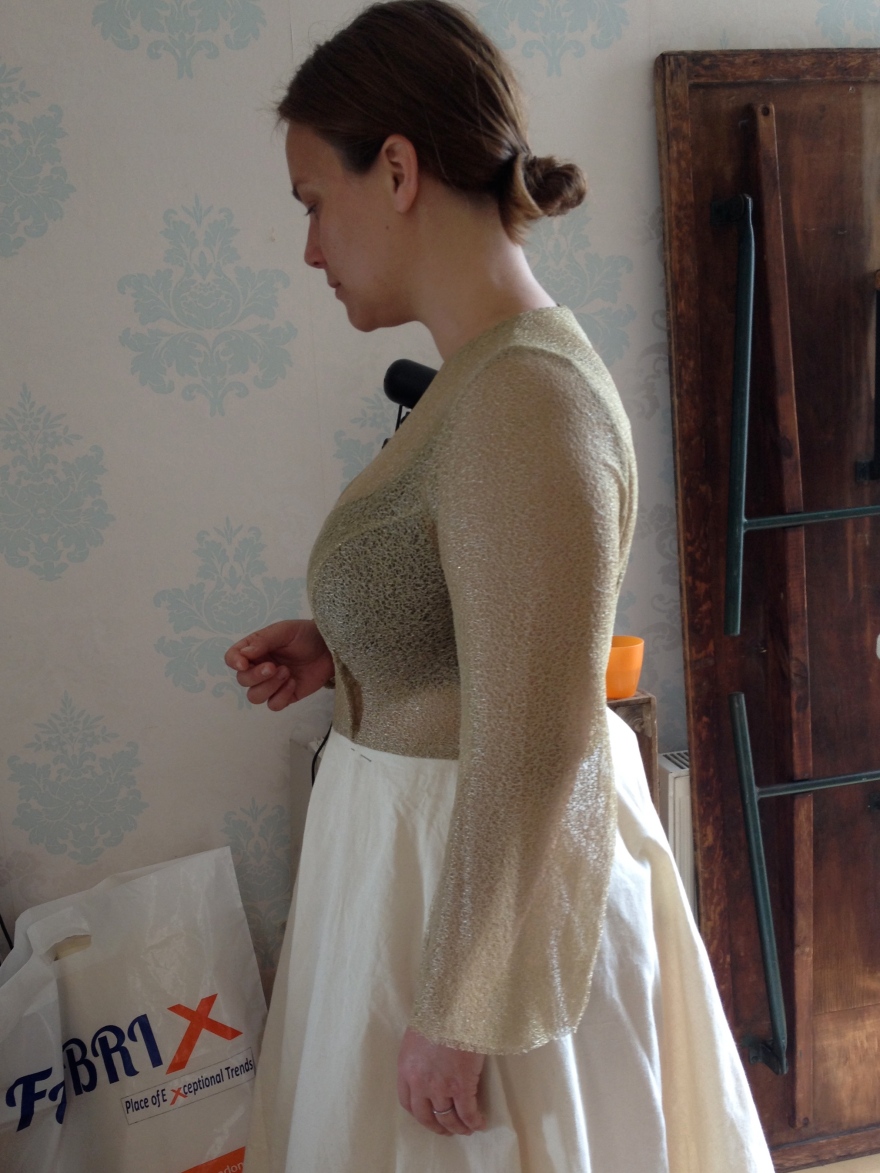 I’d made the sleeve a wince too tight, so we cut up to see how much to let back out. But it actually looked so nice with a looser, straighter sleeve that we’ve decided to run with that. It’s a bit risky I guess, but at least it’s only sleeves; if we have to whip them off and make slim ones again then it won’t be the end of the world.

So, as previously mentioned my next step is the underskirt contraption. But before I launch into that I’ll take this incarnation in to the seamstresses at work and see what they have to say on the subject. I have a lot of questions and I think there’s loads more minor disasters here that I’m not even aware of. I don’t want any last minute surprises!

Failing to prepare is preparing to fail, said… no one cool, ever. 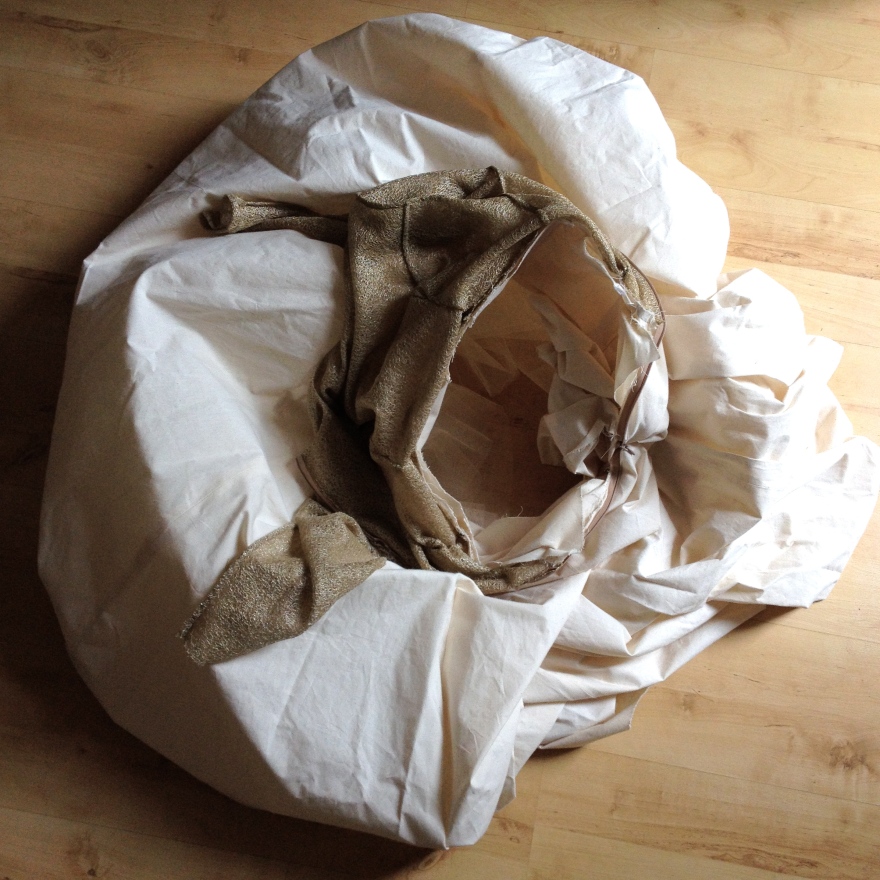